Parkplace Books in Kirkland, WA is holding a fabulous Holiday Bash and Benefit, Friday, December 13 from 7-9 PM.  I’ll be there with other fabulous local authors.  Come join us!

Tis the season to be merry…so join us for our Annual Holiday Party!

Mingle with a number of our favorite PacNW authors including Mary Daheim, Daniel James Brown, Shannon Polson, Dave Boling, John Nez, Brenda Cooper, Nina Laden and more, imbibe in holiday wassail, sample scrumptious holiday treats, listen to some jazzy music from Ostgard and Allen and…get a jump on your gift buying.  This has always been a celebratory time to come together with friends, family members and others from the Kirkland community.
Shh!…a surprise visitor will appear amongst us.
As in the past, we will be accepting donated food items and our sleigh is awaiting donations of new children books that will be handed out by KITH to children during the holidays.
So join us for an evening Holiday Cheer and Good Conversation that also benefits our neighbors in need.
Special event for Kids:
Friday Dec. 13th 6:30 pm
Storytime & Booksigning with the North Pole Postman!
Meet the main character of ‘Post’ Mark – Santa’s Misfit Postmanand have your copy personally autographed.
Have a grand Holiday Season everyone & a Peaceful 2014
Mary & Rebecca

A SLIVER OF STARDUST

A little update to let you all know that the tentative title for THERE WAS A CROOKED MAN has been officially changed:

Look for A SLIVER OF STARDUST sometime in early 2015.

Tagged as a sliver of stardust, Marissa Burt, Middle Grade Fantasy, spring 2015 books, there was a crooked man

I’m thrilled to announce that my wonderful editor at HarperCollins Children’s, Erica Sussman, has acquired my next two books, due out in spring 2015 and 2016 respectively.  Hooray!  I am so thankful to be working with Laura, Erica, and the wonderful team at Harper again!

About THERE WAS A CROOKED MAN (HarperCollins Children’s, Winter 2015):

Eleven-year-old Wren Matthews has always known she’s weird.  Unschooled, happily solitary, and obsessed with astronomy, the only place Wren fits in is the regional homeschool conference.  When a mysterious visitor appears and invites Wren and her long-time science-rival Simon Barker to join the ancient guild of magicians known as the Fiddlers, things get a whole lot weirder.  As apprentice Fiddlers, Wren and Simon have a lot to learn, but their ordinary alchemy lessons are soon overshadowed by tainted legends of Mother Goose, battling alchemists, and dreams of the dangerous otherworld, the Land of Nod.

The sequel, tentatively titled, STAR LIGHT, STAR BRIGHT, is due out in Winter 2016.

My husband Aaron tells me that my blurbs aren’t snappy enough, so he offered to compose the one below for me.  You decide which is more enticing.  🙂

Wren Matthews has super powers that will destroy your face. Read this or else. PS: It’s the funniest story you’ve ever read but full of romance, adventure, and ninjas eating cheeseburgers. Did you like Harry Potter? Lord of the Rings? They stink compared to this.

**UPDATE!  So, while I kind of dropped the ball by not posting about this giveaway until 5PM PST – oops! that means there were GREAT odds for those of you who entered and tweeted – thank you!  I’m delighted to announce the winners:

Congrats to Precious and Kelly!  I’ll be e-mailing you shortly to get your mailing addresses.

Thanks everyone for celebrating Story’s End! 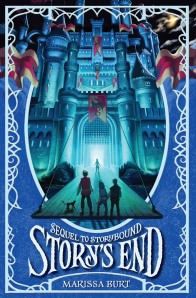 I am delighted to give away two signed hardback copies of STORY’S END, the sequel to STORYBOUND, to two readers today!

Enter by midnight tonight and don’t forget to pop on over to the NOOK blog to download your Free Friday version of STORYBOUND!

I’m thrilled to announce that La Vera Storia di Una Fairchild released this week, and I want to share the gorgeous trailer the wonderful team at Fanucci Editore created:

That music!  So incredible!

I am thrilled to announce that Fanucci Editore will release Storybound in Italy next month!  Given my Italian heritage and the fact that we still have family in Lavello, this is especially meaningful.  Now I have yet another reason to sign up for Italian lessons.  😉 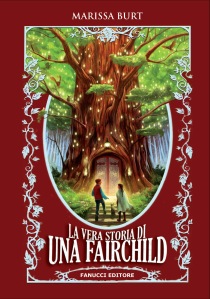 Check out this gorgeous cover Brandon Droman, Alison Klapthor, and the design team at HarperCollins Children’s created for Story’s End!  I couldn’t be more thrilled!  To celebrate, I’m giving away an ARC of Story’s End as soon as it’s available.  You can enter over at Project Mayhem!